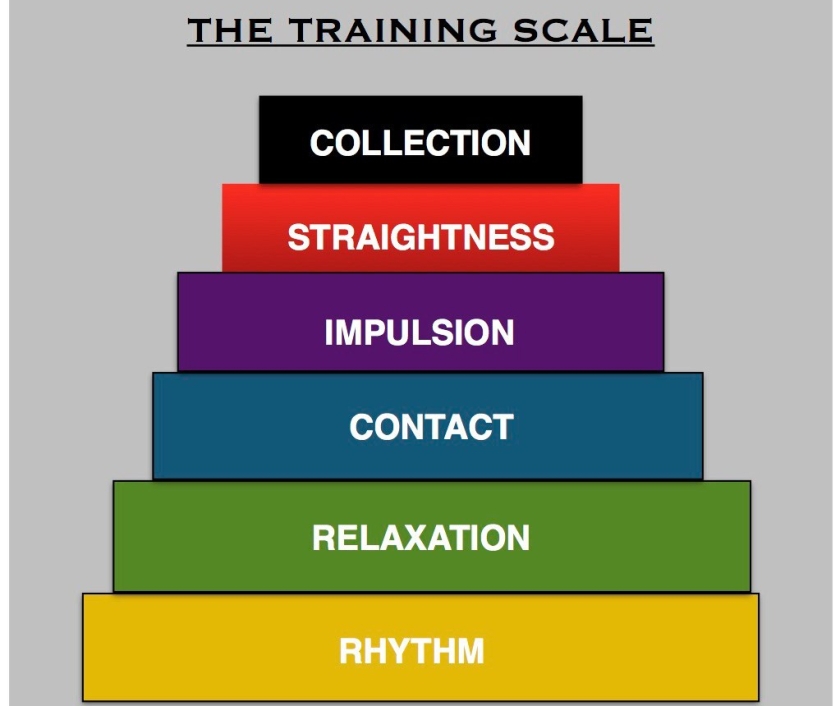 As a rule, when I begin with a new student, I introduce the idea of learning and applying the training scale to the rider’s daily training or practice.  I am very often met with looks of confusion and then it is followed by a blanket statement of, “But I do not ride Dressage!”

Dressage – Definition: The art of training a horse in a manner which develops obedience, flexibility, and balance.

The definition of Dressage, as stated above, does not include a specific discipline of riding. Whether the rider is interested in Western, English, Hunt Seat, Saddle Seat, Jumping,  Eventing,  Dressage,  Pleasure riding etc., etc., the goal of every Equestrian is to ride a horse which is obedient, flexible and balanced.

Although the riders and trainers of the discipline “Dressage” have traditionally used the scale to bring the horse to the highest levels of collection and extension, it is not a magical system only used by those who wish to piaffe and passage down the center line of an arena.

Who doesn’t wish a horse to be willing to work with a rider, to be flexible when needed, and to be willing to wait for a command with anticipation? Who wouldn’t want a horse to execute the work asked of him with ease, understanding, and confidence? Ahhhh, that is the Holy Grail that everyone who is involved with a horse wishes to discover.  Fortunately for us, each and every horse has the same thought processes and we are able to predict the responses because of our understanding of the way he thinks and responds to outside influences.  The scale is, quite simply put, a lesson plan, for the horse in training, which has withstood the test of time and when mastered will set a foundation for a future with a horse [any horse] that is safe, healthy, and fun to ride.

The words may seem fancy and the explanation of each stage of the scale may sound confusing to those just beginning to train in this way. It is designed for the horse and utilizes his natural responses to achieve the ability to progress mentally and physically, with ease, from one level of the scale to the next. No horse has the ability to understand the differences in the various disciplines used in modern Equitation.  I have never known a horse to resist a rider based solely on the type of riding they are interested in.  A horse has no idea when he enters a ring for a lesson that the instructor is teaching Dressage as compared to Hunt Seat. Regardless of the discipline being taught, all horses will react in the same way to the correct aids necessary to move up the scale.

The premise of each level is really quite simple.

First stage: A horse must have a four beat walk, a two beat trot and a three beat canter.  Each gait should be rhythmic to the eye and ear of the person doing the training.  “Every rider is essentially a trainer to the horse whether on top of the horse or beside it”, thus we say, Rhythm.  A song with no rhythm is annoying to listen to and difficult to dance to.  A horse with no rhythm is difficult to sit on and is headed for a very costly vet visit due to the lack of balance, which will result in undue stress on him and his limbs, leading to soreness, and lameness. Pretty straight forward, a balanced horse rarely goes lame, is easier to ride, is less expensive to maintain.

Second stage: A horse that is relaxed is a lot easier to work with than one more concerned about what may just pop out and whisk him away to unknown and scary places. This stage is pretty self- explanatory.

Third stage: Once the horse is moving comfortably and is relaxed, we start thinking a little more about control and making contact with his mouth using the reins. With that we then have control over his speed and direction. Most importantly, we now have the brakes necessary to stop him if something horrible and very scary changes his mind about being relaxed.  Nothing confusing here. Contact helps with control and safety.

Fourth stage: After we know that we have some sort of control over the horse, we are then able to ask him to move forward, cover more ground, and become more animated. Because we had achieved acceptance of contact, we now have control should he decide he is not interested in our training strategy any longer.

Fifth stage: In order to remain balanced, sound, and comfortable to ride the horse has to be straight.  The horse must travel on two tracks; simply put, the hind legs must stay behind the corresponding front legs on the same side.  If a horse’s head is looking in one direction and his hind end is headed in the opposite direction, it is a sure bet that you have lost what you accomplished in the first few stages: rhythm, relaxation, and the ability to move forward. If you are looking in the opposite direction from where your legs are taking you, chances are you will either hit something which gets in your way or lose your balance. Think texting and walking. Bad idea and again self-explanatory.

Sixth stage: NIRVANA!!!  We now have a horse that is balanced, relaxed, and moving forward. Because it is straight it covers more ground, is completely under control, and is now capable of getting just a little fancier by shortening his stride and collecting, with little effort, before he is asked to move forward again.

When considered in terms of simplicity and common sense, the scale is not as daunting as most believe it is.  Education is a powerful tool.  Especially, on the back of a moving, living, breathing, and many times unpredictable, force of nature.  While I have defined each stage in simple terms, as with any art form [and riding is an art], excelling in ability with better and more advanced understanding of the stages adds the possibility of being able to present a high level, beautiful, and pleasing picture of horse and rider in sync with each other. Just as a footnote, I have never seen any explanations of the training scale warn about using it on any horse other than a Dressage Horse.

A million dollar horse thinks and reacts the same way as a horse that has cost less or has been acquired for free. Now, talent, ability, or affinity for a specific discipline is a different discussion, which I will save for a later date. For the time being, only humans are guilty of overly crediting one’s own self-worth. Horses are still quite realistic about themselves. All horses!!

I hope I have managed to remove some of the stigma connected with the Training Scale and the belief that is was specifically designed for one discipline. It was designed for the horse. It was designed to teach a rider or trainer an effective way to give a horse a good foundation for any work which is to be required of him in the future. The direction or discipline chosen for the horse to perform is up to the human involved.  Once the foundation is set, one must only find a type of work and performance which allows the horse to remain confident and happy enough to give the rider his very best.